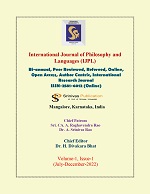 Purpose: Indian society is undoubtedly known for its lawfulness and strict observance of legal principles. But socially constructed norms about gender in India displaces many sections outside the gender binaries as outcaste and such a placement of gender fluidity outside the mainstream can damage the legality of India. Only a genuine awareness and recognition of laws and rights of each section can ensure proper functioning of government. But the stark reality in India, as in many other parts is that people are unaware of or fail to observe the basic rights of different sections. Transgender community is one of the important sections facing extreme level of legal discrimination from public. Traditionally believed and followed notions about transgender community hinder people from considering them as normal. They are always positioned as the other in terms of the gender. This kind of otherness felt by transgender from their own society often turns into a weapon capable of destroying their very existence. Thus there is a growing necessity to educate the masses about the basic rights and legal protection offered by Indian constitution for such a community. An earnest attempt to accommodate such a class as normal and not as the other should come from every citizen who are part of a democratic country like India. Thus the paper entitled ‘Shielding Transgender Persons: An Analysis of Transgender Rights in India ‘attempts to highlight the legal rights of gender minorities thereby creating proper attention to the same.

Design: The article is prepared by collecting information from secondary sources such as peer-reviewed journals, National and International Publications. Internet sources, and research sources like Google Scholar, Research Gate, SSRN, Elsevier, Academia, and Shodhganga are used for identifying the research gap. To highlight the key aspects of the research ABCD analysis is used. Data is acquired from research journals, doctoral theses, scholarly articles, and websites to carry out the research that has been proposed. Concentrating on the keywords Transgender, Transgender in India, Transgender Rights, Legality, and Lawfulness, Gender fluidity, Gender Binaries, of the chosen topic, the methodology used depends mostly on collecting, analyzing, and interpreting previous knowledge. The textual analysis and comparative method will be used in the methodology. There will be a close reading of the select works of Transgender writers followed by discussions on related issues. Writing research papers and participating in conferences on the subject are also aimed at. While conducting the analyses of the study, APA Manual has been followed to adhere to its requirements.

Findings: It has been found out that limited study is available regarding the real rights of transgender population in India, thus a paper discussing the legal protection offered for such a minority in India is very essential for educating public about the need to provide humane treatment for such a class within the gender divisions.

Originality: The proposed study focuses primarily on the constitutional rights offered to the transgender community in India and the measure of its realization by different gender sections. An awareness created through this paper which manages to be an original one about the rights for such a community is primarily intended to ensure safe and secure survival of Indian transgender. Equal treatment of different gender categories is a must for any society aiming to be democratic in its principles and procedures.